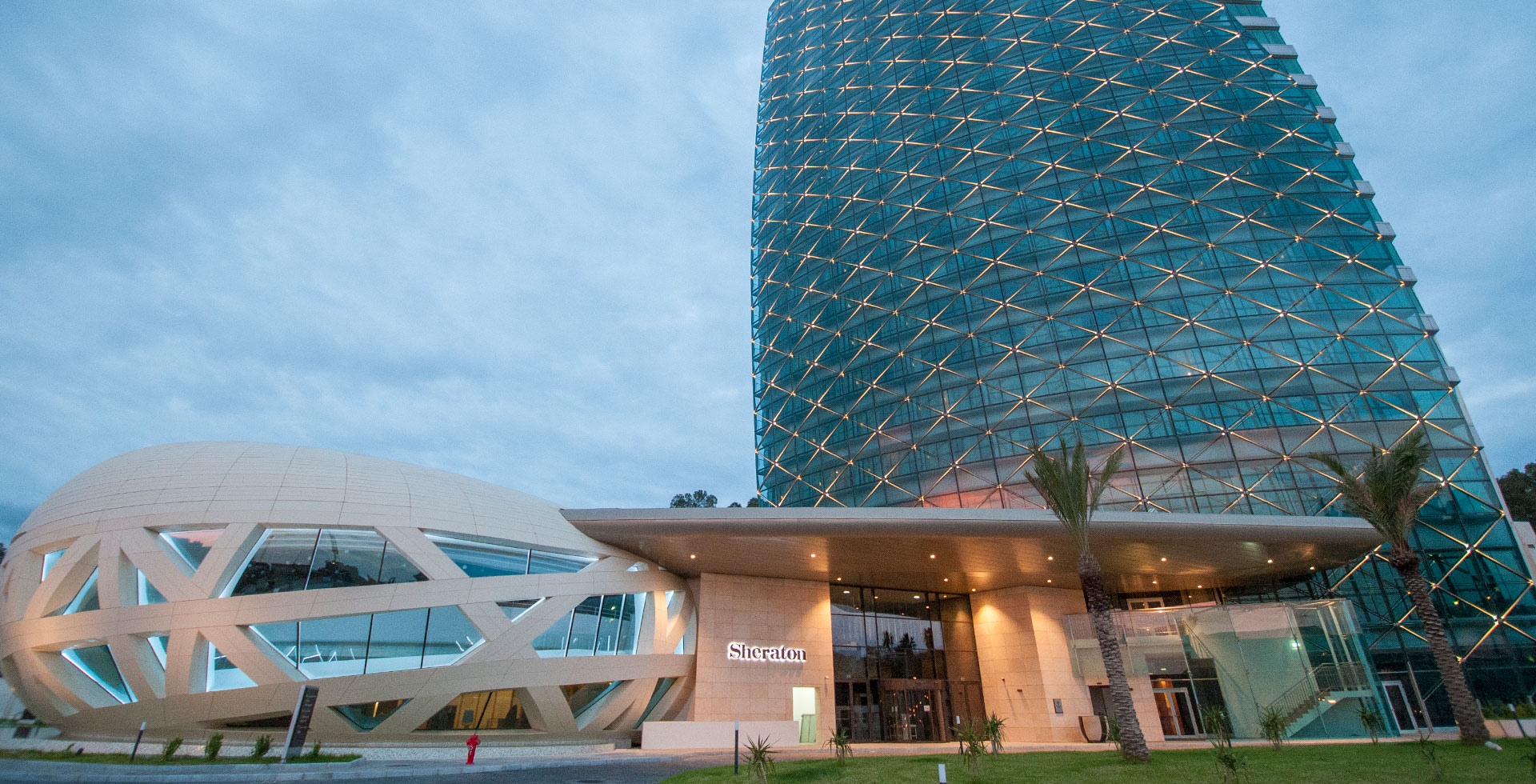 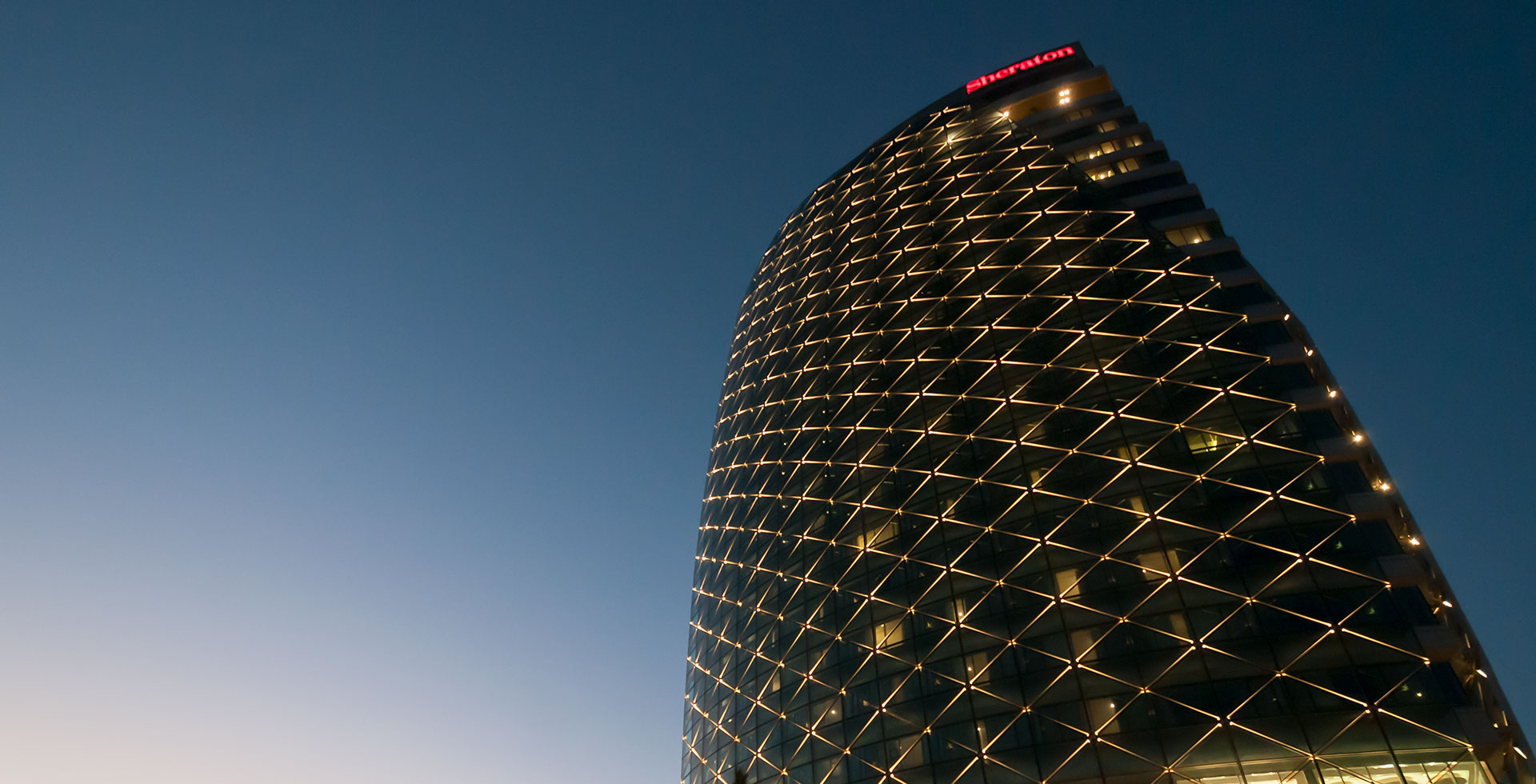 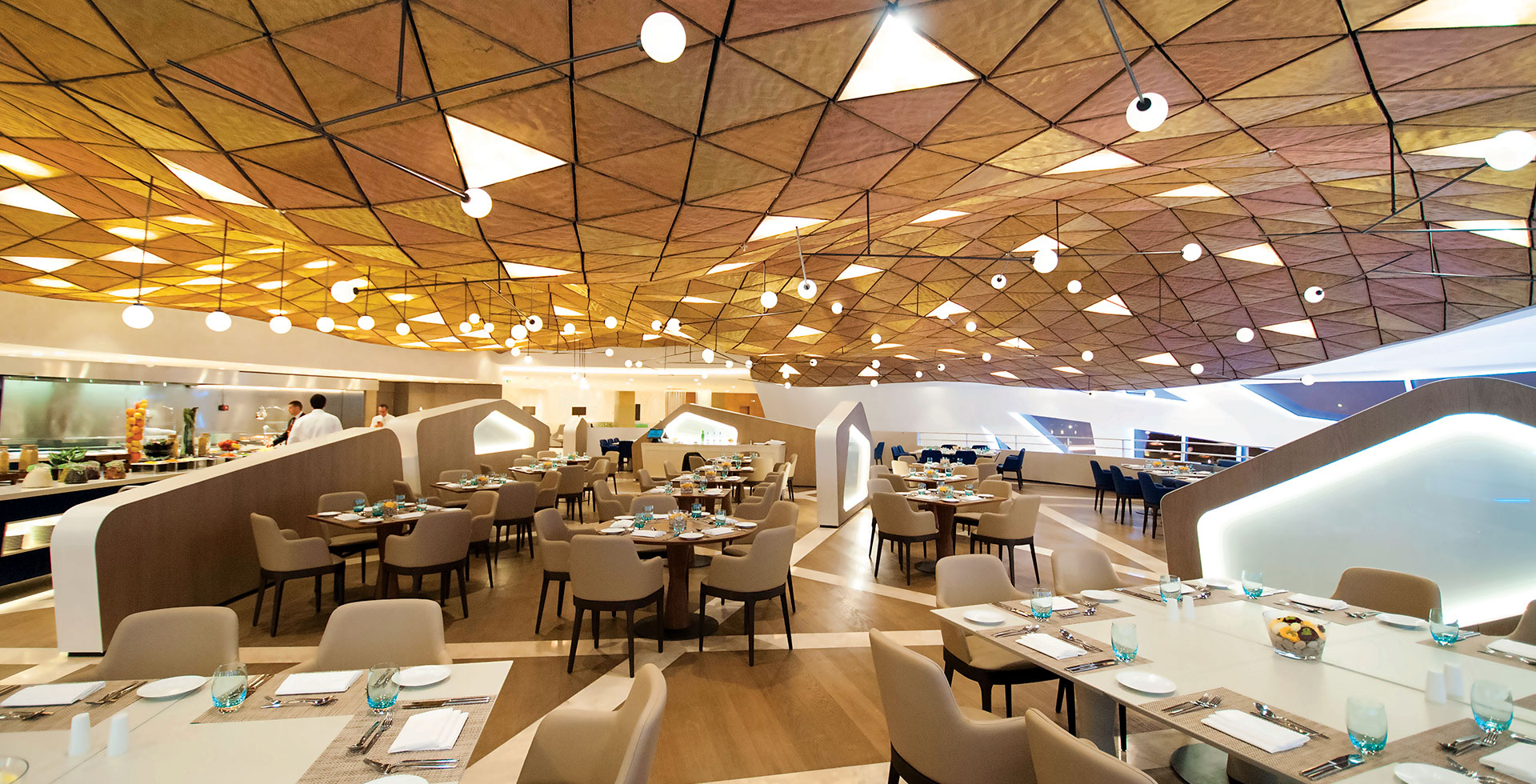 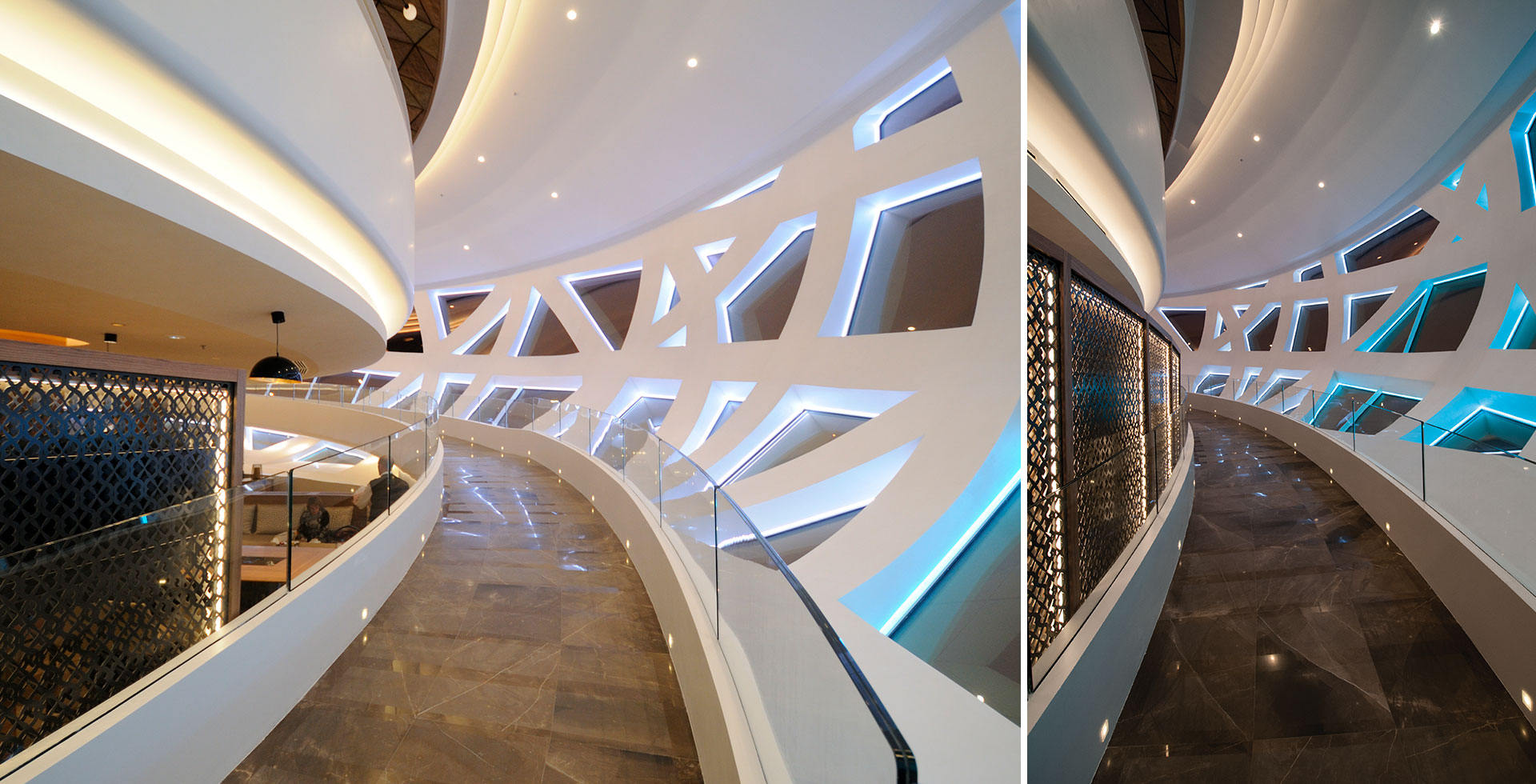 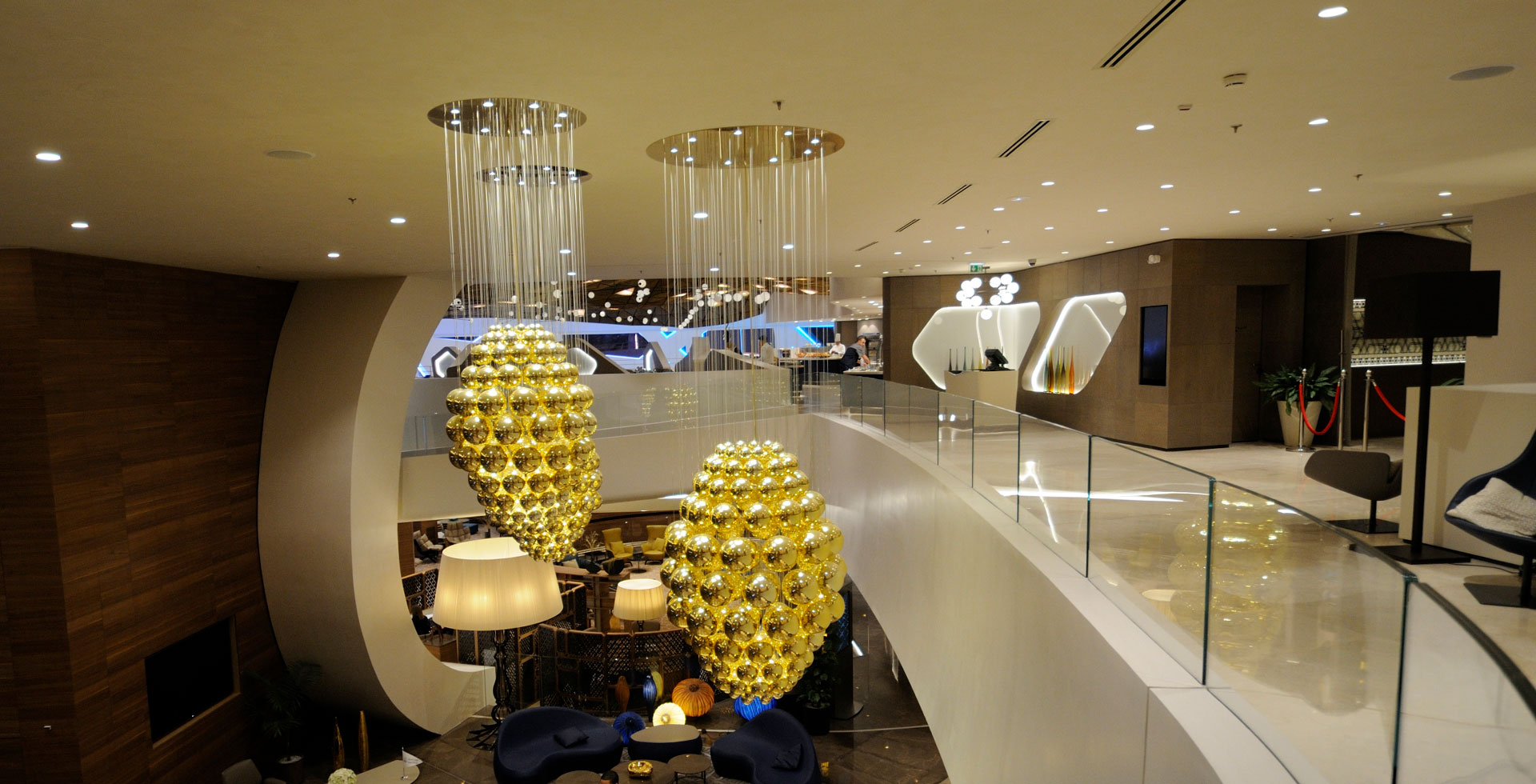 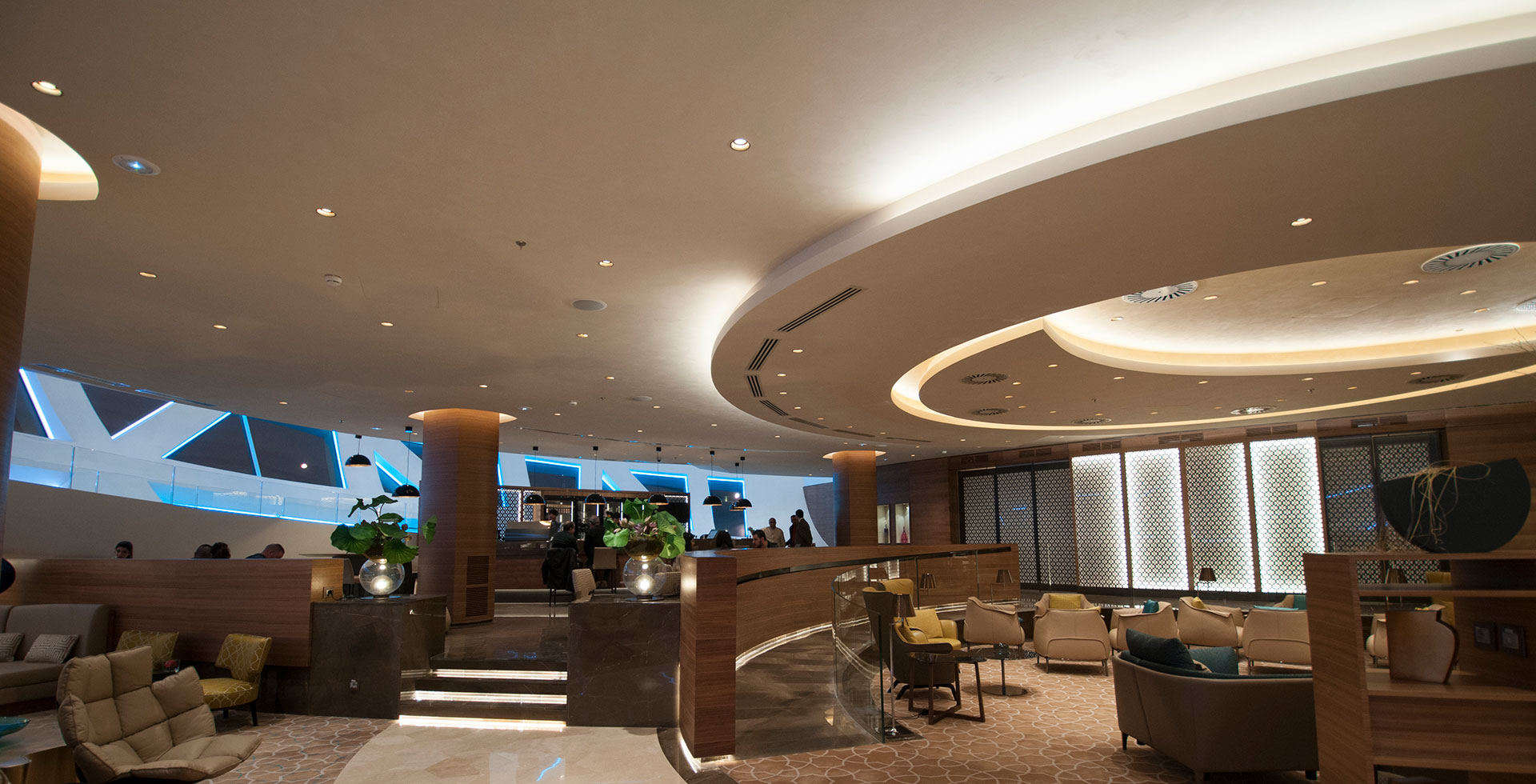 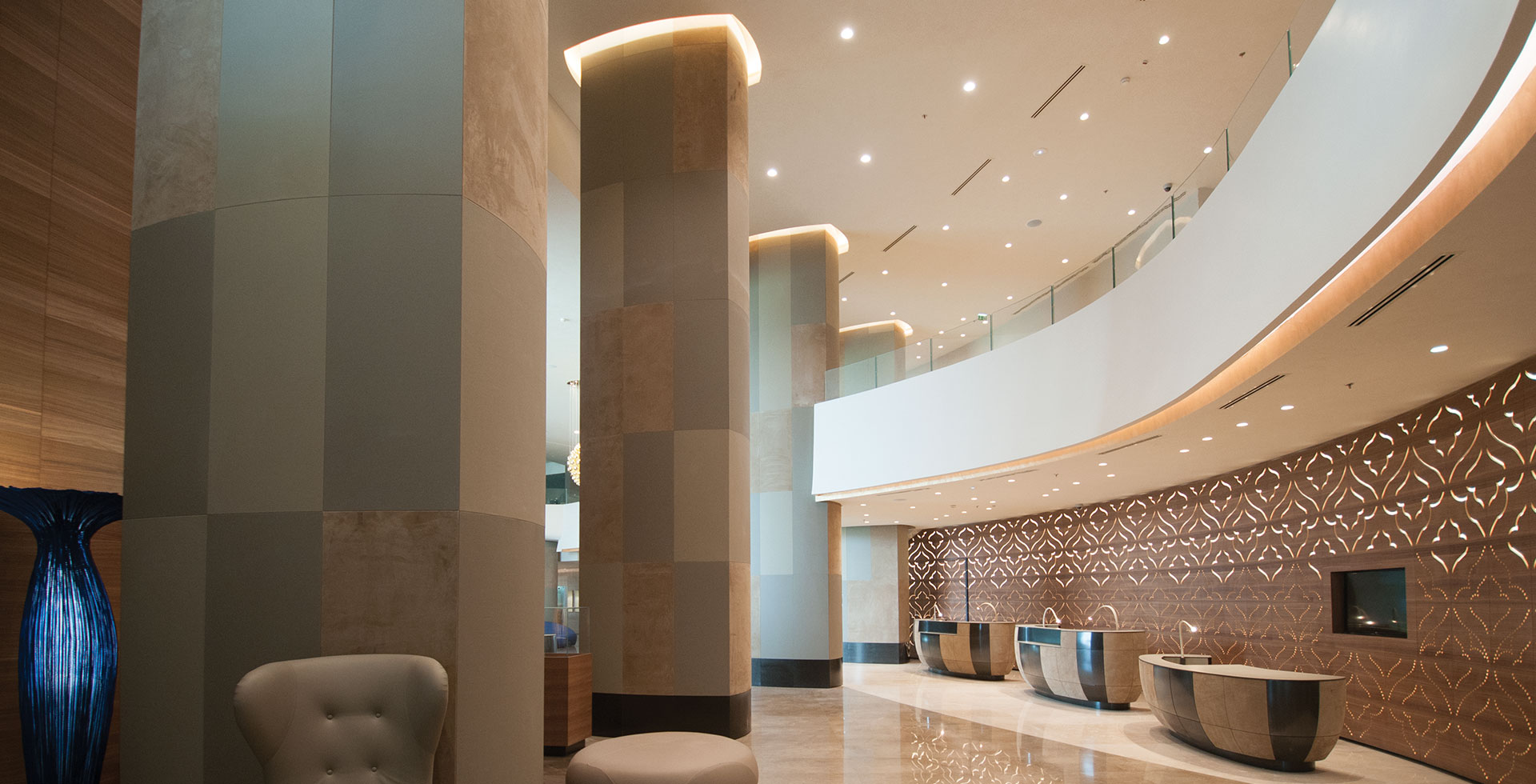 LUXURY AND RELAX: B LIGHT LIGHTS UP THE SHERATON HOTEL IN ANNABA

B LIGHT, leading producer of LED luminaires and accomplished pioneer of highly innovative solutions, has illuminated the Sheraton Hotel in Annaba, an authentic jewel of restoration nestled in the urban landscape of the Algerian metropolis.

The Sheraton hotel, located near the harbour, definetely stands out with its ultramodern hi-tech silhouette. The original facade is animated by the blue tower which hosts the guest rooms and its slender vertical shape is balanced by the building at its feet, a white oval construction containing the restaurant with a supporting structure built from 49,500 m3 of cement, 7,500 tons of steel and 12,000 m2 of glass.

Thanks to B LIGHT’s contribution, this perfect geometry also stands out during the night, when the tower’s surface is lit by 1200 bespoke projectors realized in compliance with the project designers’ requests and managed in DMX control. Installed within the glass walls, the luminaires create a grid of perfect pulsing and luminescent rhombuses which cover the whole length of the building. Some technical expedients were introduced into the design of the projectors to prevent them from causing any visual disturbance to the guests staying in their rooms.

The oval building beneath the tower was also equipped with a lighting system which frames its large windows: profiles from the INSERTO MINI SLIM RGB range, linear luminaires specifically designed and customized for the structure in which they are fitted, make the characteristic “honeycomb” framework stand out.

Light welcomes the clients as they arrive at the hotel. This is possible thanks to the ATRIA X2 R recessed downlight luminaires, installed in the platform roof just outside the entrance hall. Once inside, one cannot help but admire the magnificence of the spaces and the perfect marriage between technology and architectonic environment. This is permitted by the presence of an adjustable recessed downlight luminaire from the BASTER range, also produced following specific guidelines and installed in the corridors and in many other areas within the hotel. B BUBBLE suspended luminaires lined with golden leaves are produced for this specific project and used in the bar and restaurant areas. For the plasterboard ceilings in meeting areas such as the lobby and the restaurant, B LIGHT chose ATLAS X2 R dimmable recessed downlight which fits in well with the hotel’s modern architecture.

Finally, to enhance the outdoor areas and the swimming pool, bespoke MAIA X1 DUO and BUTTON CL luminaires were used with an angled surface.